Another VMworld in the Can

VMworld 2011 was the best conference in years.  Here's why:

Location:  The conference was held in Las Vegas this year.  What a great change of pace from San Francisco.  Better food, better entertainment.  VMware announced it will be back in San Fran for 2012.  I hope VMware is getting one helluva deal to keep making attendees return to the same city over and over again.  Hey - you get an apple with your boxed lunch every day and the mayor's face in on a sticker on the box - what a deal (what a joke)!  Please, anywhere but San Fran again!  I'd even go back to LA.

Key Notes:  I believe we are now seeing a "post-infrastructure" VMware with a consistent, rational vision for the first time.  And I mean a vision that could serve them for the next 5+ years.  I won't rehash it here - I believe everyone in IT should watch VMware CTO Dr. Steve Herrod's session, whether your a VMware fan or not.  Even if they get it 60% right, it will still have a major impact on the future of IT.  And let's face it, VMware currently has the "brain-share" with IT professionals that Novell and Microsoft once had.  Watch Dr. Herrod's session here:  Engineering the Future

Program Guide:  After registering and picking up my backpack and lanyard, I didn't understand why the no pocket used to store my printed schedule was missing.  They really shouldn't have given this as a print format option as it was unnecessary.  This year you could download a free iPhone or Android app.  This app was awesome - kudos to VMware!  My only complaint was that it was a little graphics heavy (warning you to use WiFi while running the app for best results is a good indication that something's up).

VMworld Party:  Okay, the party before the band, the Killers, was great.  The party after the band, the Killers, was great.  The band, the Killers, sucked.  Sorry but it's true.  First of all, they appeal to a limited demographic. Secondly, their music sounds like whiny Euro-trash.  I gave them a shot and watch the first half of the gig (it was all I could stand).  Third, no interaction with the audience, they just stood up there and played.  I was bored.  Worst VMworld party band yet.  Highlight of the night - my buddy spilled beer on some girl's purse and she when psycho on him - you had to be there to appreciate it, she was hilarious (poor girl, entertainment was at her expense).  Let's hope next year is better.  On a positive note, the percussionist group, food and drink were excellent.

Best of Awards:  Just a few comments here... I think it's odd that VKernel won best of virtualization management last year and they're not even a runner-up this year.  It makes me wonder if previous awards are factored into the scoring/criteria (i.e. 'let's give it to someone new this year')?  I also find it interesting that a host-based replication product won best of BCDR and best of show.  See my previous article on vSphere Replication (nice!).  I don't take these as seriously as I used to - in part due to the fact that I saw many other excellent products in the solutions exchange.  But here the list for those interested: Best of VMworld 2011 Awards

Solutions Exchange:  Very good again this year.  Seemed roomier - not sure if it is because the space was bigger of if there were fewer booths.  No real unique or useful swag this year - mostly T-shirts and miscellaneous trinkets.  Note-to-self: go to Splunk's booth for T-shirt first!  They usually have the most clever sayings and this year they went fast, like the first night.  The "crawls" (food/alcohol) were great as usual.  I highly recommend spending a lot of time there talking to vendors as part of your conference experience.

Attendance: Attendance has gone up every year and this year was no different.  19,000 were present on Monday up from 17,000 last year.  It would have been 20,000 except for hurricane Irene.  This reminds me  - it seems like something bad happens just around VMworld almost every year.  This year hurricane, last time in Vegas it was record rain storms, 2008, stock market crash, another year we (the Midwest) had a wind storm like nothing seen for over 100 years causing homes and businesses to be without power for a week or more (my wife handled it like a champ!).  If I remember correctly, there was even some weird moon/sun/earth anomaly that happened during the first VMworld in 2004.

CTO Party:  Having been selected among other vExperts at random, I was invited to this party for the first time.  I hope I get invited again next year as this was a special event.  Both CEO Paul Maritz and CTO Steve Herrod was there along with a number of top VMware engineers including the guy that invented vMotion (how cool is that!).  I got to meet several interesting guys, one of which works just north of me (small world).

Alumni Elite Event:  I am among about 45 people that have attended every VMworld conference.  Last year there were 55 so that's a drop of roughly 18%.  That means if I attend the conference for approximately the next 10 years I'l be the last Alumni Elite standing!  But I digress... To show their appreciation VMware invited us to dinner and a show.  Dinner was decent, the gift bag was just okay - an iPod Shuffle and CD soundtrack of the show we were going to attend (I'm giving the iPod to my nephew - my family will remain iDevice-free!).  I met an "interesting" gentleman that paid for the show himself "to keep his streak alive".  Hmmm... don't think I would ever do that.  The show was Le Reve.  Great show but would have been better seeing it with my wife.  I can't complain though as we got VIP seats that included champagne and some fantastic truffles.

Signage: There was lot's of interesting signage this year.  This site documents it best: 20 Memorable Examples Of VMworld 2011 Signage  I'd also like to include one of my own.  Oracle had these signs on top of just about every cab in Vegas.  They're hilarious! 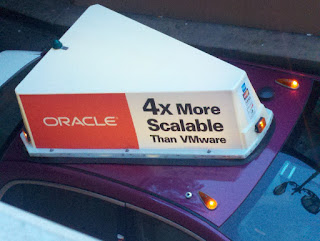 LMAO... That reminds me, I learned another ancorynm - FML.   If you don't know.  I can't keep up with the kids!  At this rate texting acronyms will become their own language.

Anyway, yet another great conference.  People often ask me why I go year after year.  Well, see above.  If this stuff is boring to you, have your pulse checked.  If you have a pulse, get out of IT and do something different, life is too short!

I'm sure there are other highlights I missed but expect to see some future articles that have a tie-in to things I learned at VMworld.  I may also write a "survival guide" before the next conference.  There are several already published in the blogosphere so I'll have to see if I have anything to add.