Another good year for VMware and VMworld.  This year the themed seemed to be 'integration'.  VMware announced vCloud Suite 1.5 which includes what is just the beginning of integration between various VMware products.  I spoke with several VMware developers at the conference and this message was pretty consistent.  Here's the rundown on other aspects of the conference:

Location:  From Vegas, back to San Francisco!  Well, the food was much better than 2010, I'll give them that.  But still - blankets to eat lunch outside (again), really?  I walked back to the "hang space" which was perfect.  At one point I was with a group that included one of the event coordinators and it was really interesting to hear things like how early they have to book locations and all of the logistics that go into the event.  After that discussion, I have a better appreciation for what it takes to put on an event of this size and will therefore stop complaining about the location(!).

Key Notes:  Last year was all about VMware's vision for cloud and desktop computing.  This year was more about integration.  They announced products that were consistent with both the "vision" and "integration" themes:

They also announced the end for the vRAM "tax"!  This brought the second biggest applause of the morning (and it was big).  Even bigger was Paul Maritz's 'handing over the reigns' to VMware's new CEO, Pat Gelsinger.  These guys have known each other for some time - they both worked as engineers for Intel.  Small world. 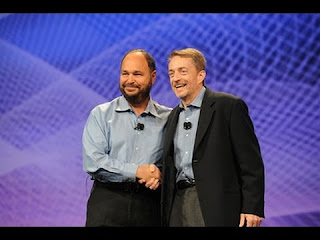 VMworld App:  Not much love for the app this year.  Unfortunately last year's was better.  This year it was riddled with performance problems.  Even the live polling was a miss for me.  It obviously worked for some people.  By time the question loaded, the poll was closed so I didn't get to vote on much.  WiFi performance was spotty too.  Both the app and WiFi access improved by day 3, but by then the damage is done.  On a more positive note, the VMworld 2012 community hosted on Socialcast was fantastic.  VMware is shutting this down by the end of September.  I understand why, but have to wonder if this isn't a better tool than VMworld.com - I think it's open for debate.  I hope they provide a Socialcast site again next year, maybe making access available a littler earlier.

Alumni Elite Event: It's been 9 years in a row now (which means next year is the big 10, a decade of VMworld!).  The dinner was mostly anti-climatic.  We landed on Forbes Island, except it's not an island, but a floating boat/barge kind-of-thing. 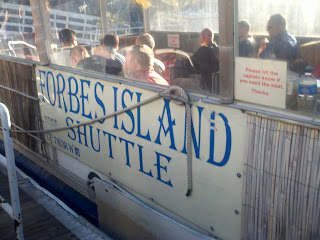 Here's the lighthouse - fantastic view from up there: 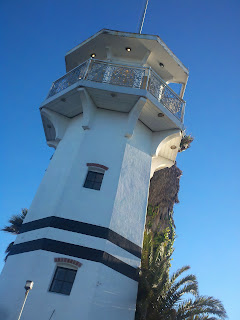 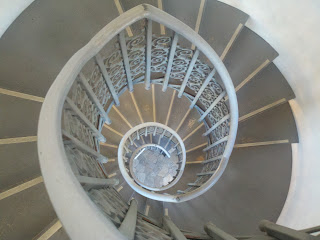 Here's the restaurant and lighthouse from a distance.  Notice the lack of sea lions.  Those planks were full two years ago.  Apparently they follow the schools of Mackerel of which there aren't many this year in the bay: 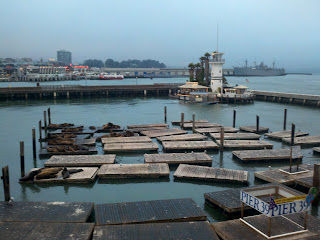 I have to say the food was excellent.  The gift was just "meh", but it was a gift so I won't complain (too much).  On the bus over, one guy said he thought we were getting a MacBook Pro.  I'm betting he was disappointed!  I had to laugh at that as I thought an iPad at best.  Last years iPod Shuffle and Vegas show was an awesome surprise.  In the event planner's defense, she was new to the whole thing and maybe not given much time to put it together.  I expect next year will be better.
When they started recognizing Alumni Elite, it started with 55 of us 3 years ago.  Last year, the number dropped to 45.  This year there were 32.  Technically, there's less than that as they are including guys that may have missed years of the US conference, but attended the European VMworld.

CTO Party:  This was a great party again this year.  As I mentioned before I got to meet Pat Gelsinger and I also met Steve Herrod.  Both guys were accommodating.  I had drank a couple on an empty stomach before meeting either of them so hopefully I didn't embarrass myself!  See drink in hand (sorry, crappy cell camera pics - this is a good justification for having a decent camera on your phone, right?  Will I ever get this chance again?): 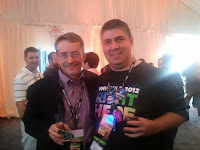 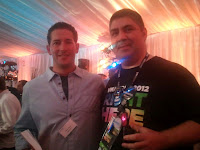 VMworld Party:  I stayed at the CTO party right up until the start of the VMworld party (and then some).  By time I got to the hall, the opening band, Morning Parade, on played 2-3 more songs.  Which is good because I'm not a fan.  It reminded me of the Killers, a.k.a whiny Euro blandness.  Not really rock 'n roll in my book.  But maybe the kids love it and I'm out of touch, IDK.

Now we're in-between bands and they have this video board/music mash-up thing which is cool (well, except maybe for the Sound of Music, not sure why that was included).  And once Marley's "One Love"  started the party was on!

So out comes Jon Bon Jovi and he gets right down to business.  And for the most part, he's all business the entire show.  Not much interaction with the crowd.  I think he took a que from the Killers.  Oh he did have some witty banter, something like - 'sing-along with me, if you do you can put that you sang with Bon Jovi on your resume, the girls know that's a good thing'.  And 'come on guys you can do better than that, I flew a long way to sing for you tonight', or something like that.  Really?  I'm thinking the guy has a big head.  Maybe I missing something here.

Lack of audience connection aside, he did look like he was having fun and I know everyone around me was having fun.  He did three Bon Jovi numbers - Bad Medicine, You Give Love a Bad Name and Wanted Dead or Alive - and a handful of covers.  His encore was Wilson Pickett's "634-5789 (Soulsville, U.S.A.)".  Hmmm,  would not have been my pick for an encore song but that's what he did.

Overall he was entertaining and his band was pretty good, the stand-out being the violinist.  She did some phenomenal playing during a short jam at the end of the Who's 'Baba O'Riley'.  If you can find it on YouTube I suggest watching.  Again, sorry for the crappy cell phone pics: 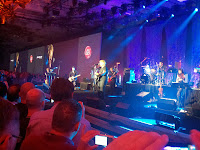 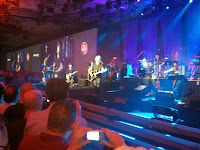 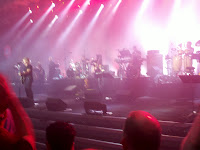 Solutions Exhibit: Wow!  This best and biggest one yet!  This was really one of the big highlights for me.  I believe it in everyone's interest to spend a lot of time here talking to vendors and discovering new products and solutions.  This year was no different in this regards.  I brought back ideas that included several different products I had not even heard of before this event.  Here are some pics of the exhibit floor: 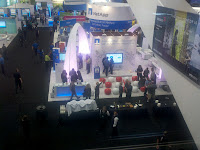 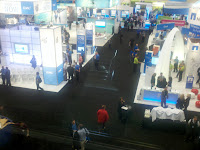 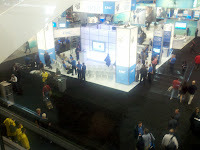 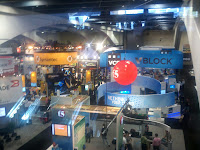 The swag was really flowing too.  Many t-shirts, too many... made it to Splunk's booth and got a fantastic T before they ran out this year.  Other vendors should take note - make a T that people actually want to wear, not with just a giant name/logo on it.  People will actually wear it more often than just doing lawn work(!).  The swag of the year award has to go to... drum roll...   sources unnamed for the rubber chicken!  Here it is on my button wall with Darth Tatar protection (yes, weird, I know): 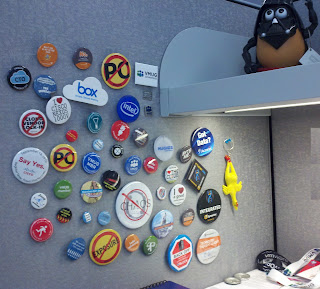 Hmmm.... so what is the rubber chicken all about?  Well, I guess you'll just have to "find" out next year when you take a hands-on lab.

The Whiptail booth had a special guest.  I got to meet this guy and get his autograph.  The line was long but the wasn't wasn't too bad: 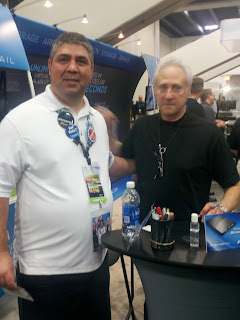 You can find more photos of me and other attendees here: WhipTail's Facebook Photos Page.  SimpliVity had this junk, er, I mean super car in their booth.  Do you think I'll win an Audi R8? 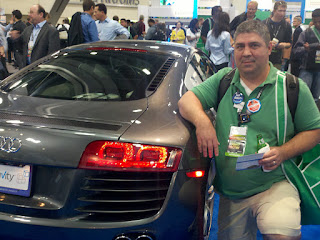 I've never really "won" anything at VMworld over the last nine years.  I'm not going to start holding my breath now.

Attendance:  Record attendance again this year, roughly 21,000 attendees.  And guess what, another hurricane!  This time it was hurricane Isaac which caused some serious flooding, but was much less powerful than Katrina.  Actually, this was the year of personal tragedy - my wife's van blew a transmission, our home theater receiver went bad and our Acer tablet stopped working.  What's worse, one of my son's slept-walked and fell down the stairs.  My wife rushed him to the ER and luckily he checked out okay, just a big knot on top of his head (whew!).  Both the van and receiver have been fixed now.  Still waiting on the Acer tablet.  So... yeah, getting a Samsung next time!

Signage:  For whatever reason, CRN continues to capture the "wacky" side of VMworld.  Check out their expose here: 20 Weird and Wacky Scenes from VMworld 2012.  The sumo wrestler was hilarious - they had a 20 foot tall version outside on the street corner.  Unfortunately, I was unable to snap a pic of Oracle's taxi signage, but it was there again this year except it read "4x more scalable" with the added "2x faster than VMware".  LOL (again)!

Takeaways: New for this year, I'm including this section of high-level takeaways.  These are things I learned that were interesting or some-how relevant to my current workplace:

So yes, another great conference this year.  As previously mentioned, next year will be number 10 for VMworld and I think we're all expecting big things.  VMworld returns to San Francisco again next year at the Moscone Center, August 26-29.  See you there!