Okay, yes, it's been too long coming, but it's finally here - my VMworld recap.  Now, I have a good excuse, but you'll have to read the next post for that!  Note that most of this was written shortly after the event, so in that since the content is "timely".  So here it is, enjoy! 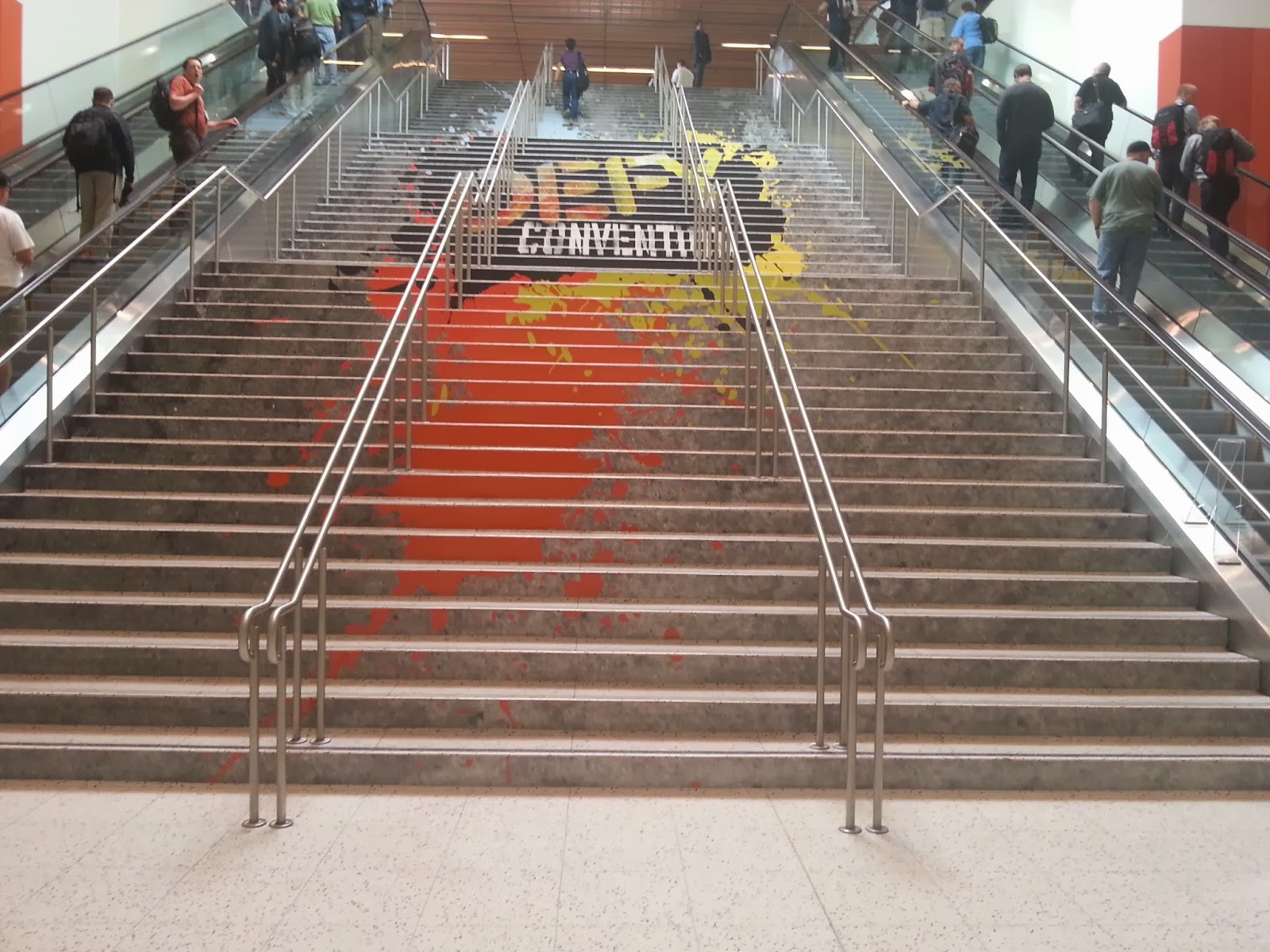 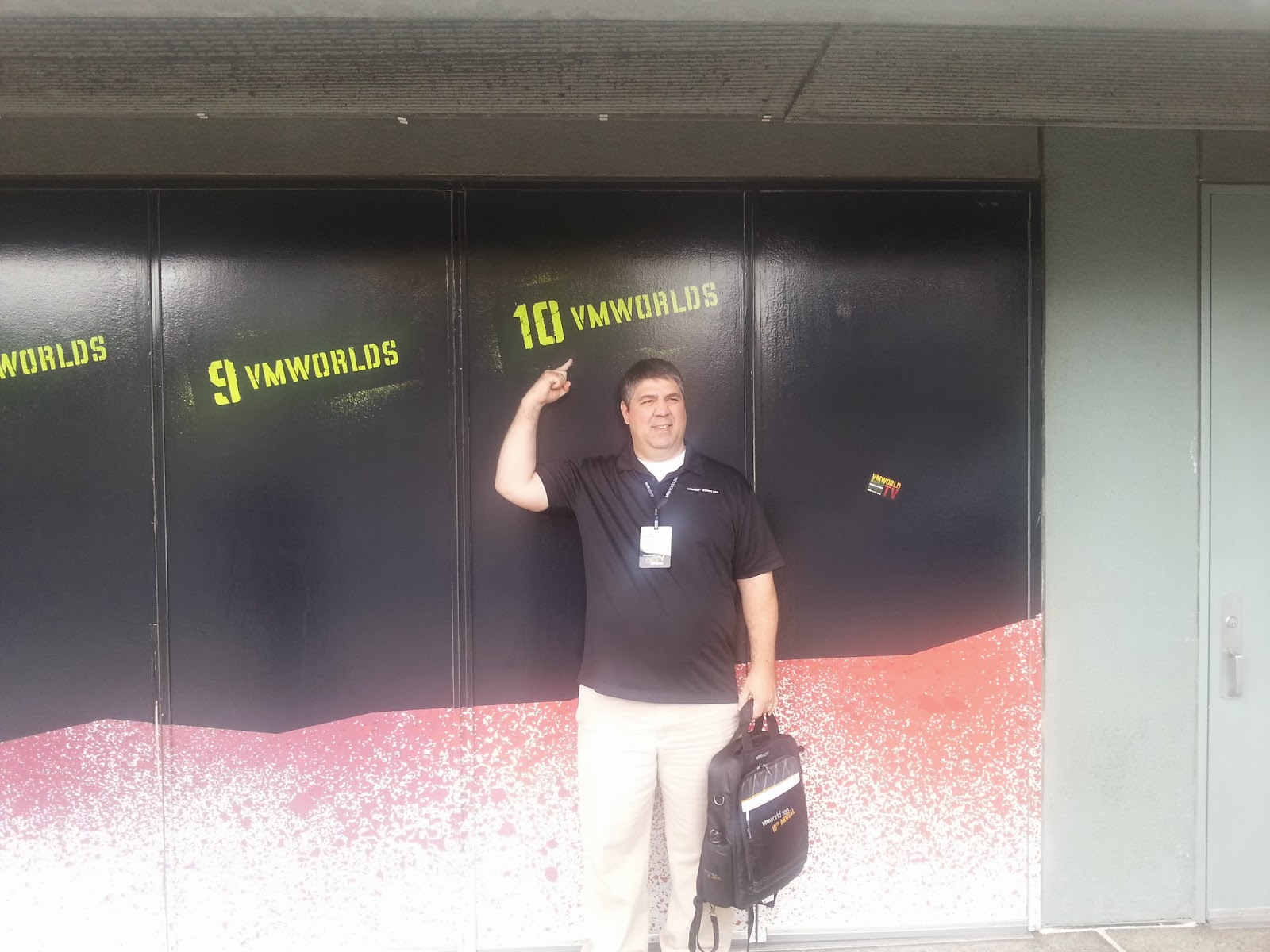 There was the "10th Annual" wall this year where we all got our pics posted (and by all, and mean every attendee that wanted to have their pic posted).  We were one of the first pics taken so they're at the bottom of the "1".  Can you see me? 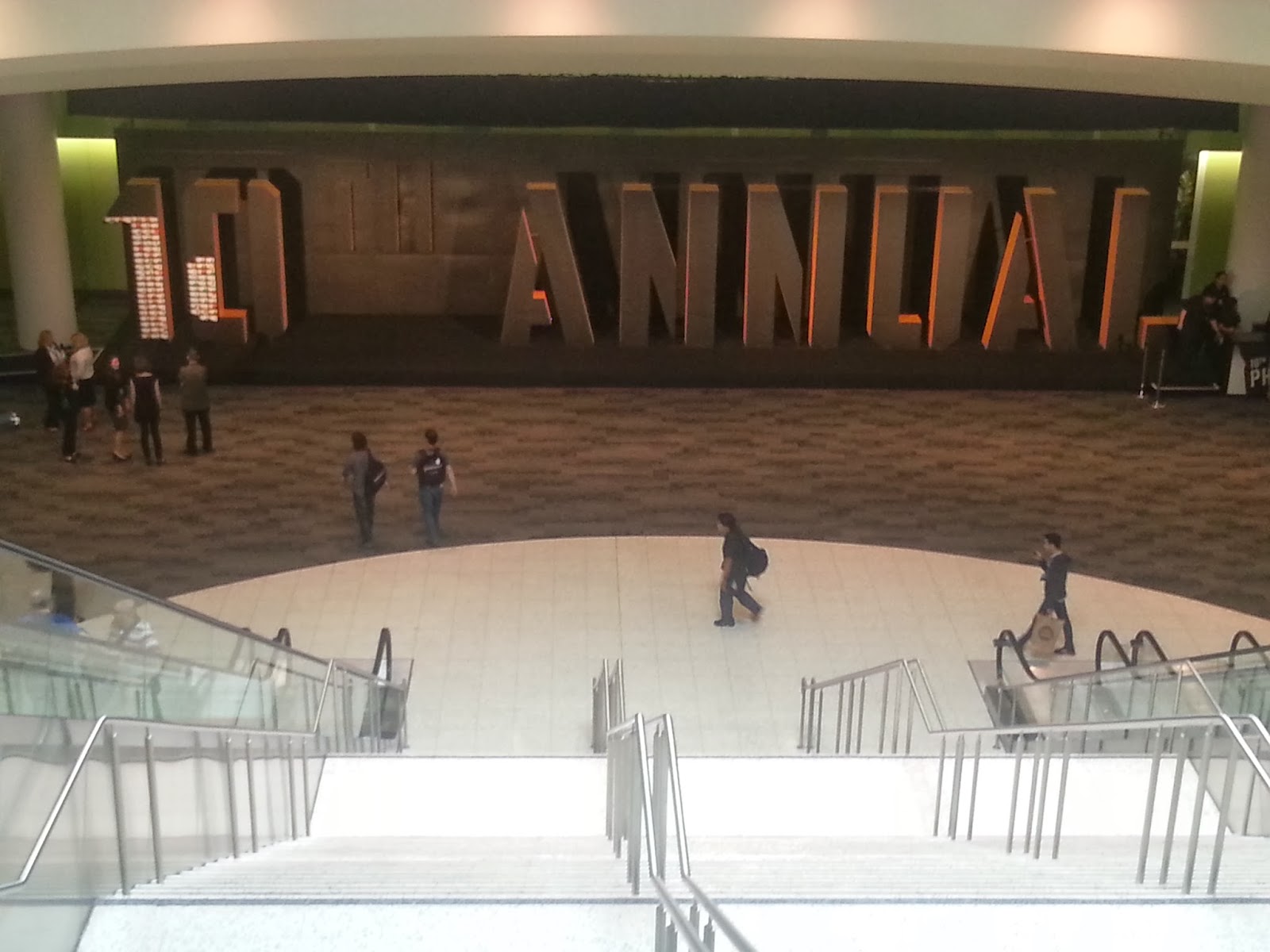 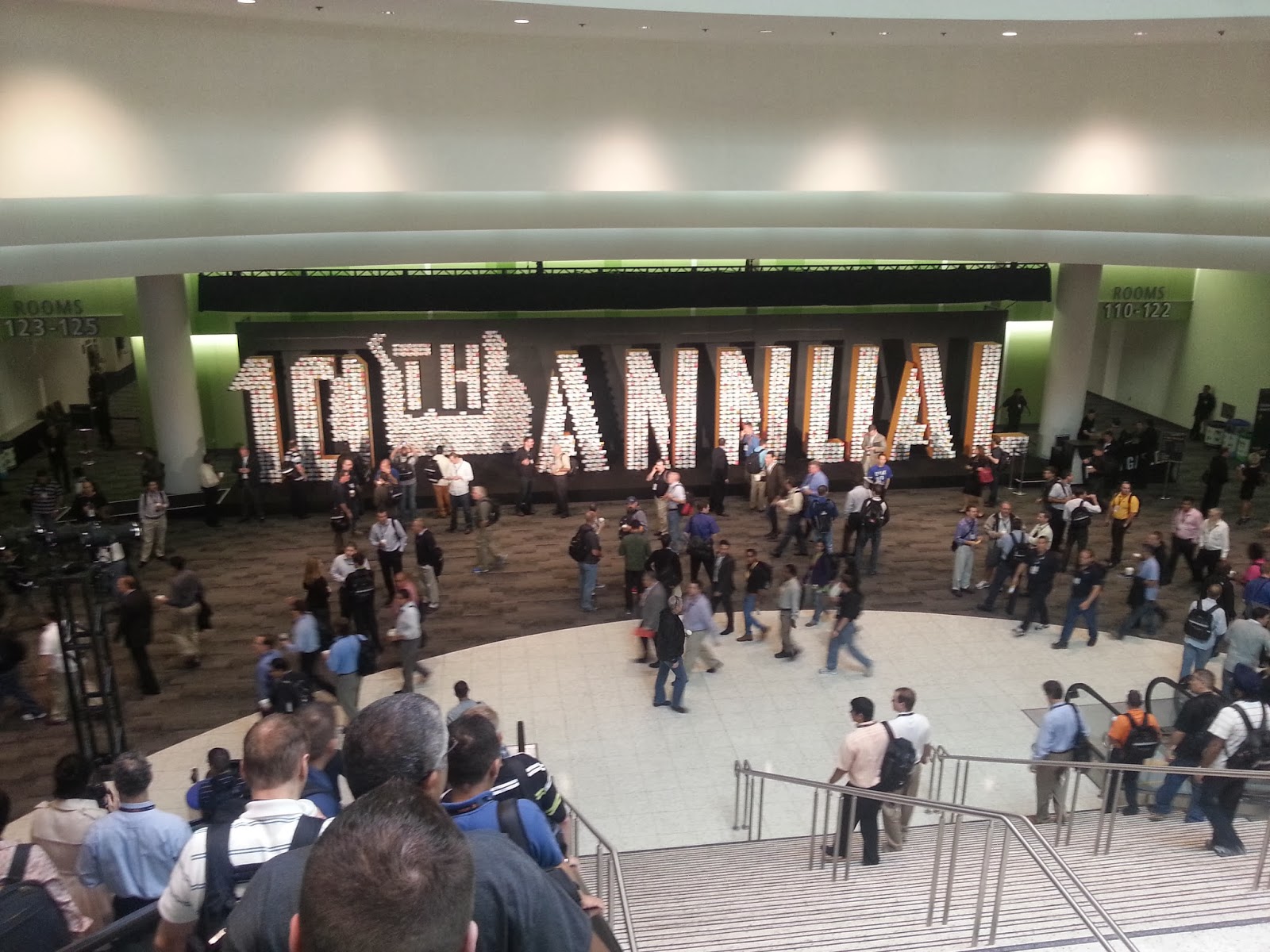 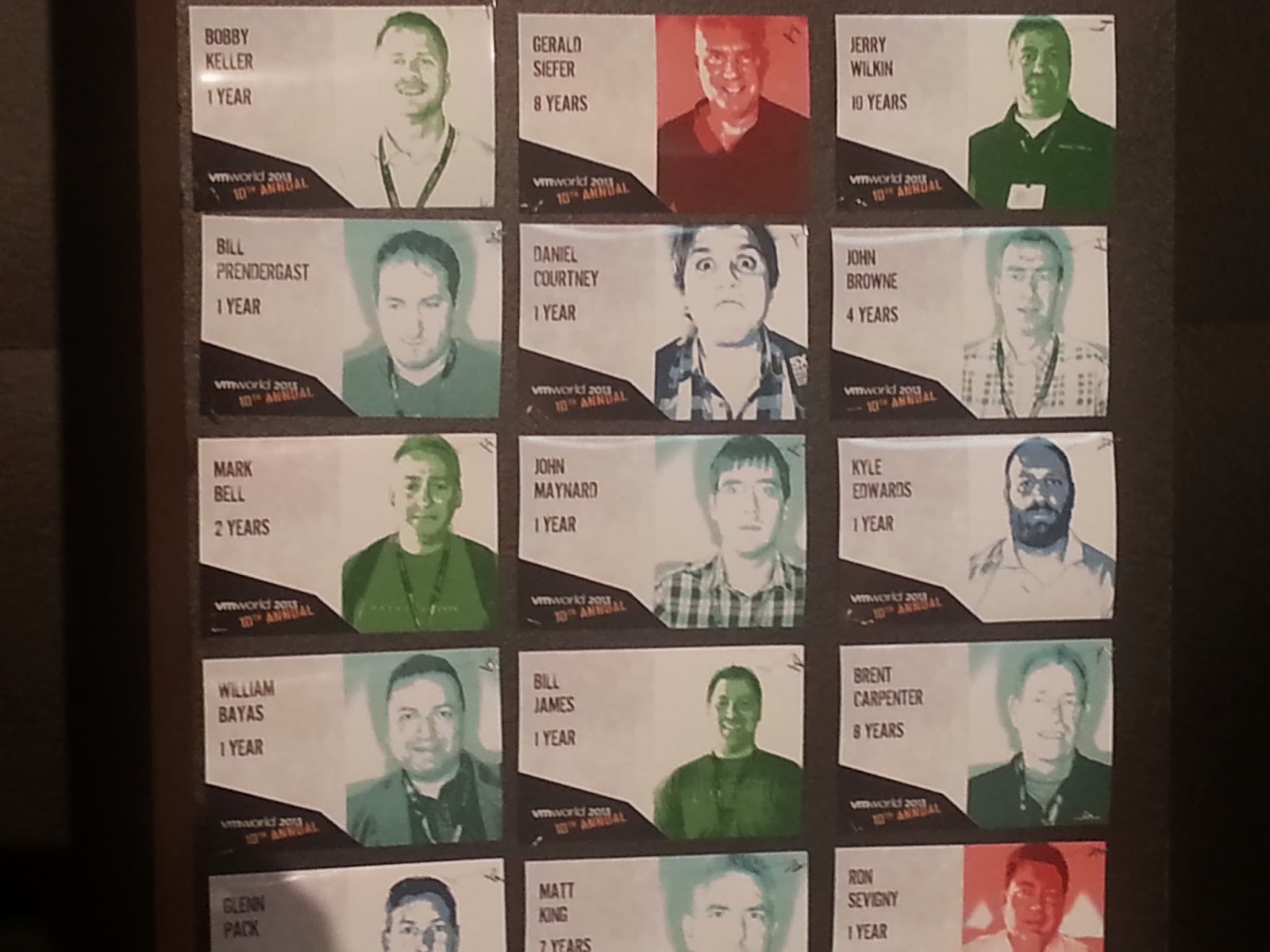 VMworld seemed to be about one word for VMware this year: focus.  I could see the focus (or re-focus in some cases) on the entire stack from the virtual infrastructure to hybrid cloud computing.  This focus seems to be coming from a renewed customer focus = they're really listening.  Proof-in-point = The shifting of vCloud Director features to vSphere and vCloud Automation Center, leaving the multi-tenant capabilities for cloud providers.  I really believe we have Pat Gelsinger to thank for this along with his management team.  With this renewed focus on customers, market and product/feature mix, I think VMware has really put itself in the position to continue to be on the forefront of innovation and an agent of change in the IT world.

Location: San Francisco this year and again next year - I really have nothing else to say about it.  I go there for the conference.  I actually prefer Vegas, but to each his own.

Keynotes: As I mentioned, this year was about a renewed focus on product mix and the datacenter stack including the following four areas - Compute, Storage, Networking and Operations.

The big story in Compute is the announcement of vSphere 5.5.  This will be a big release with a many improvements and new features.  I won't detail them in this post but you can read about them here:
https://www.vmware.com/resources/techresources/10385

The big story in Storage was, of course, VMware's new VSAN feature/technology.  And they announced a public beta you can download here:
http://www.vmware.com/vsan-beta-register

VMworld App:  Much better this year.  WiFi still weak during the general sessions, and it didn't help that the app was updated a half-million times during the event but I suppose there were a lot of schedule changes(?).

Alumni Elite Event:  Whoa!  The 10 year Alumni Elite event was, in a word, awesome!  They bused us down to Candlestick, er, AT&T park an hour before the VMworld party.  We got our own locker in the Giants locker room, along with great food and drink.  I'm not a big fan of clam chowder but it was so highly recommended I figured I had nothing to lose.  Holy cow, it was fantastic! 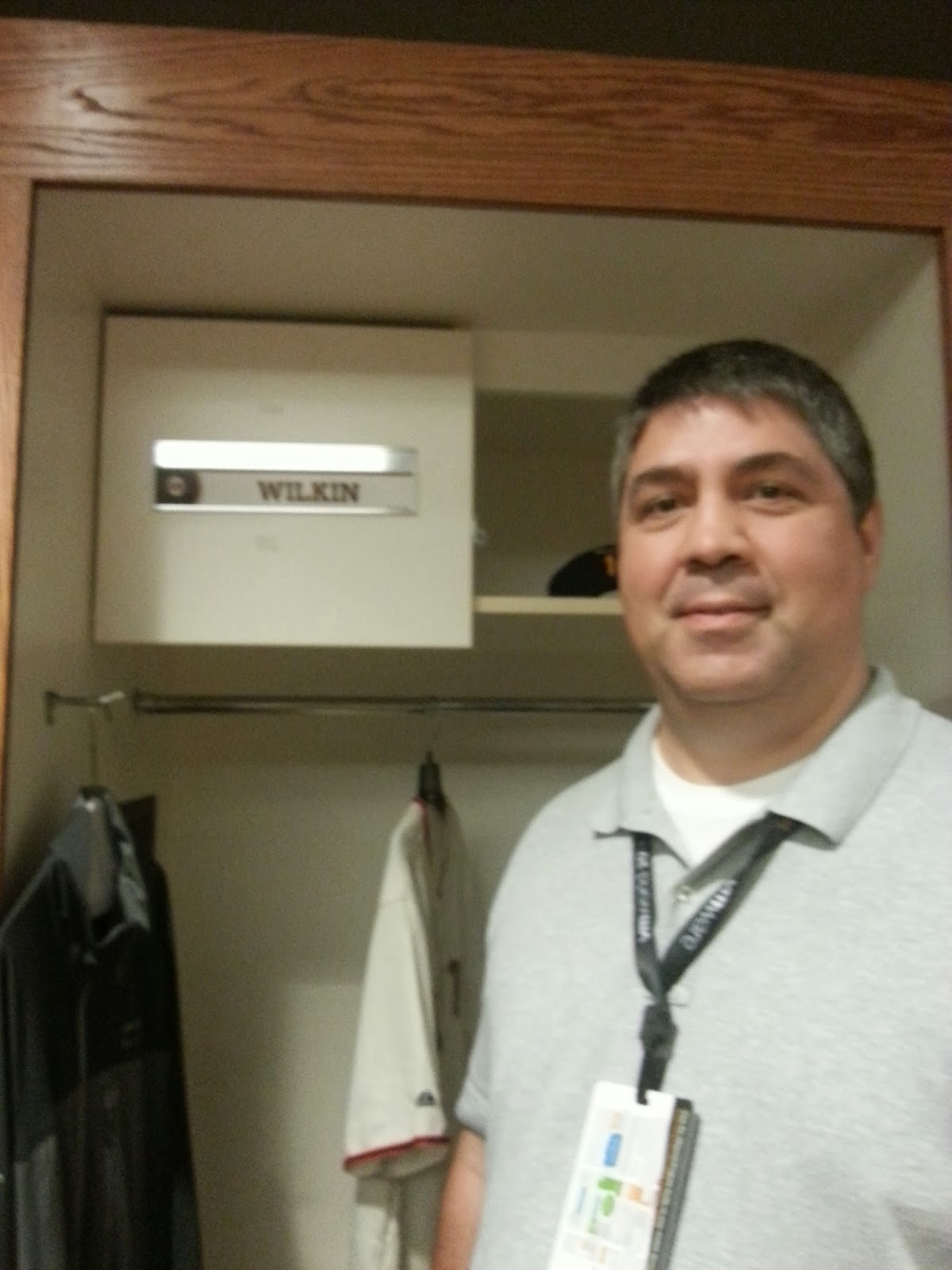 There were many highlights on this night, meeting VMware's CMO, Robin Matlock, was certainly one: 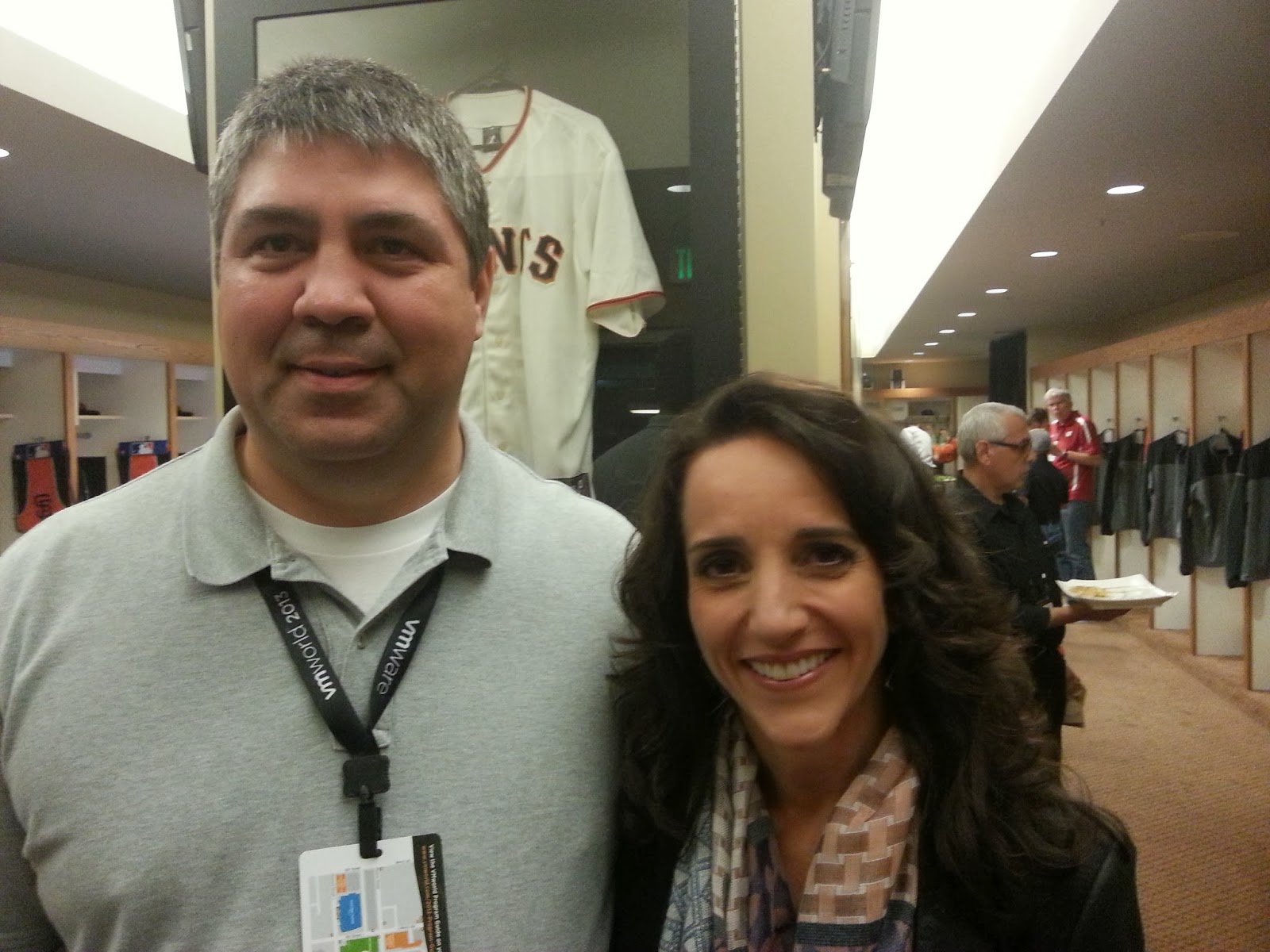 Getting to talk shop with VMware's CEO, Pat Gelsinger again this year was fantastic: 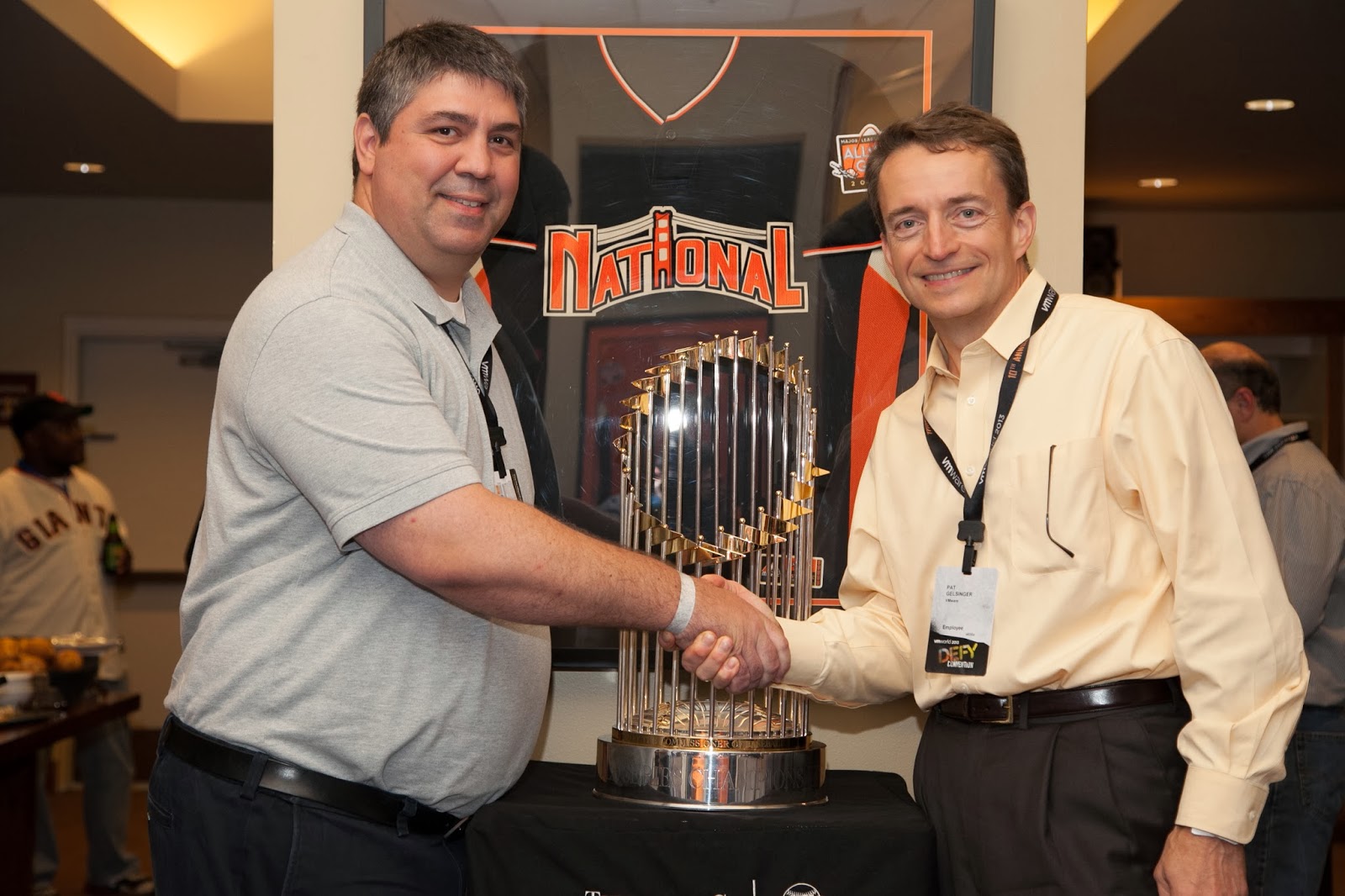 I also got to meet VMware's COO, Carl Eschenbach.  Let me tell you, all three of these executives were very down-to-earth, highly energetic, and very excited about VMware and the future of IT.  I really didn't expect them to be as genuine and accessible as they were but I was pleasantly surprised.  I really shouldn't have been since VMware is a great company that attracts great talent.

Later that evening we get to try the batting cages - 60MPH pitches, not a bad workout.  Out of six pitches, I made solid contact with three of them, whiffed one, got out of the way of one and fouled the last.  Pat is up after me and let me just say he made me look bad, and this was supposedly after only two hours of sleep!

Finally, I was told there are 34 of us left.  I only count 27 in this picture, so several didn't make it to the pre-party event.  We seem to lose about 10 per year.  25 next year?  I wonder who will be the last one standing? VMworld Party:  Time to head out to the party: 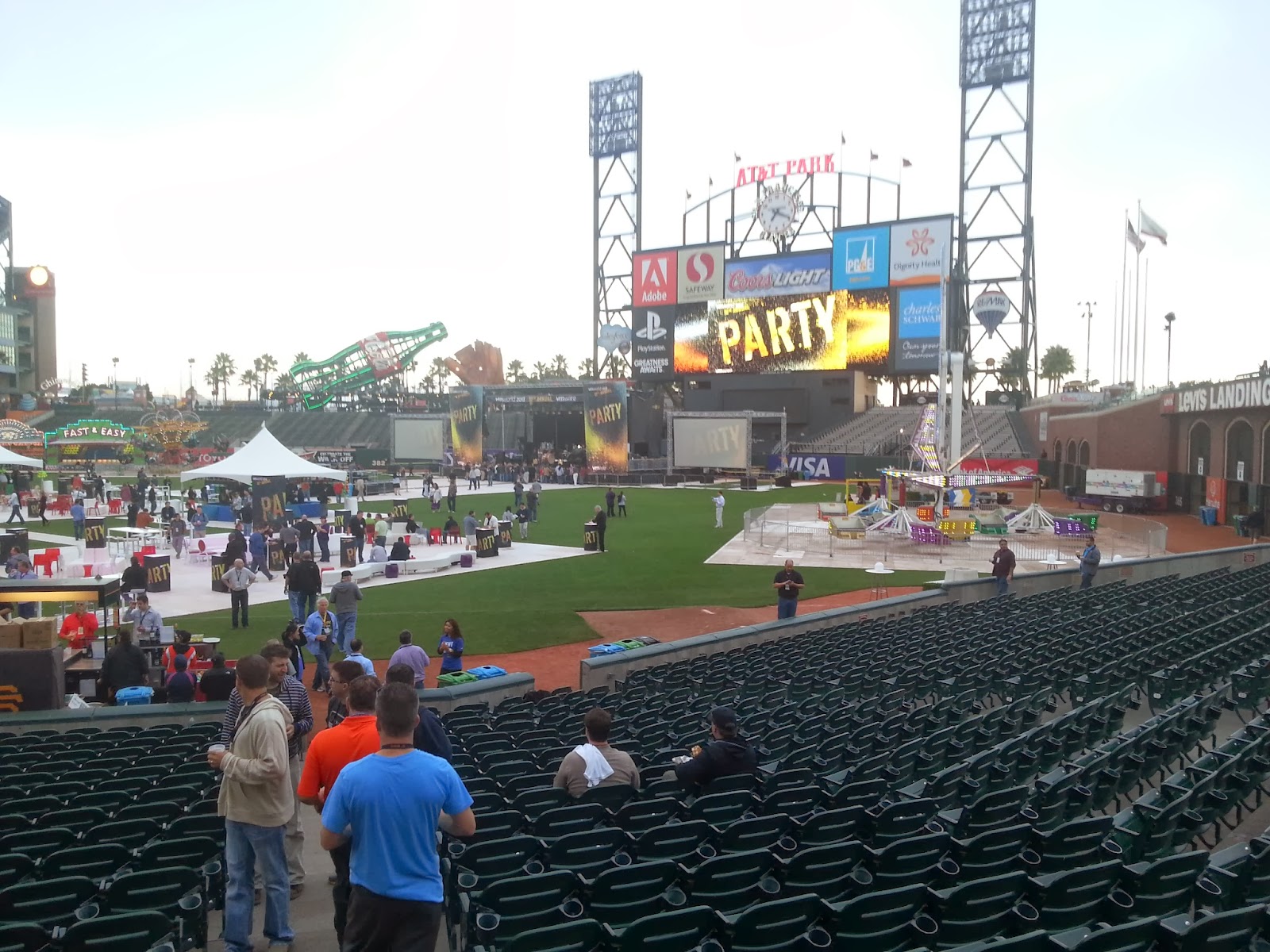 It was a real "festive" atmosphere.  The entertainment for the night was Imagine Dragons and Train.  I thought both groups put on a great show.  Train was a bit of a surprise for me - I didn't realize how entertaining they would be nor did I realize how many of their songs I know until I heard them: 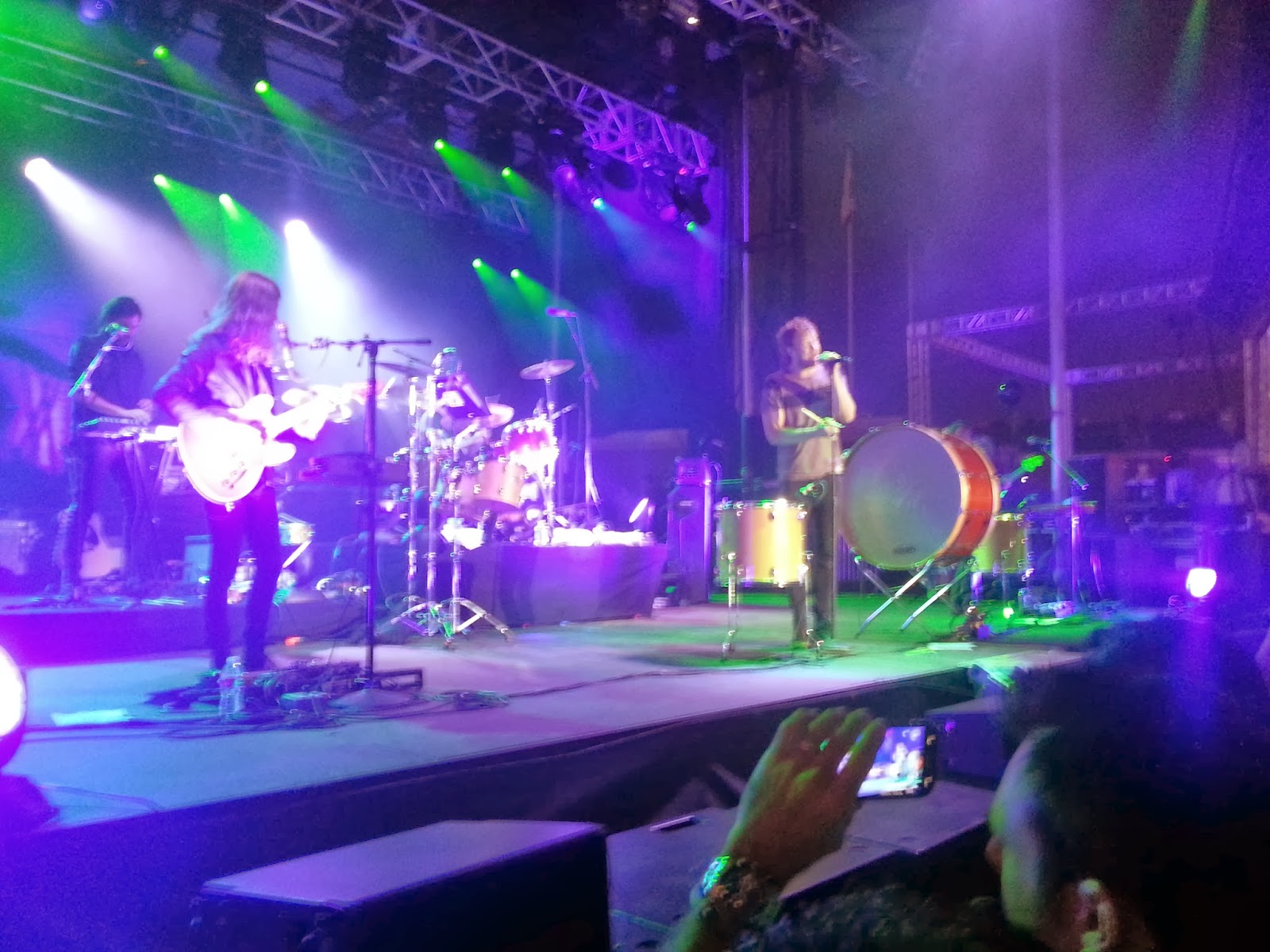 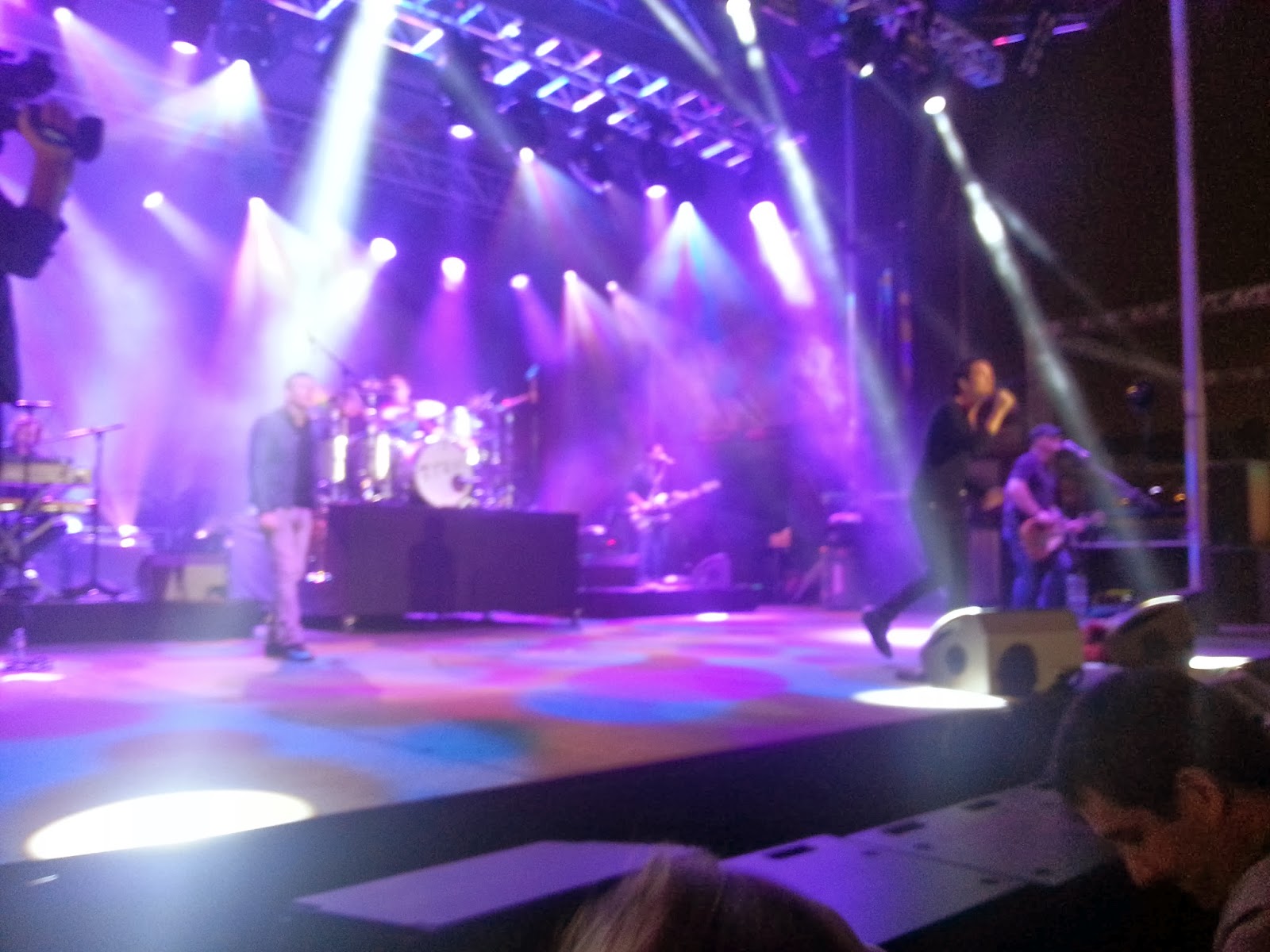 Solutions Exhibit:  There was another record number of exhibitors this year.  As always I highly recommend hitting the floor and talking to as many vendors as you can.  It a great way to discover new tools or solutions you may not have known even existed.  No unique schwag to report on this year, however there was still a lot of it if you wanted it.  And again, I didn't win anything - not that I tried very hard though.  There's always a group that hits it really hard.  I guess I don't have the patience, especially when I know the odds are quite high against me.

Attendance:  If there's one thing that's consistent about VMworld, it's that the attendance numbers go up every year and this year was no different:  over 30,000 - another record.

Break-out Sessions: I attended more of these this year than previous years and found them to be very useful.  This encourages me to go back to VMworld.com and view the ones I missed.  If you can't make VMworld, I highly recommended buying a subscription to gain access to the sessions.

Hands-on Labs:  These are all about timing - if you go at the right time, there's little-to-no line.  On the other hand, I saw lines that wrapped around the corner and outside of the building(!).  I'll try to take note of the best times next year, but for now my advice is if the line is long, keep checking back.  On a positive note, I did notice the line seemed to move at a decent pace.

Adventure:  So we asked a cabbie to take us to Gordon Biersch brewery/restaurant.  We had gone there the previous year and they had good food, great beer and scenery over-looking the bay.  So he drops us off at what looks like the right spot and takes off.  Walking up the steps we saw this: 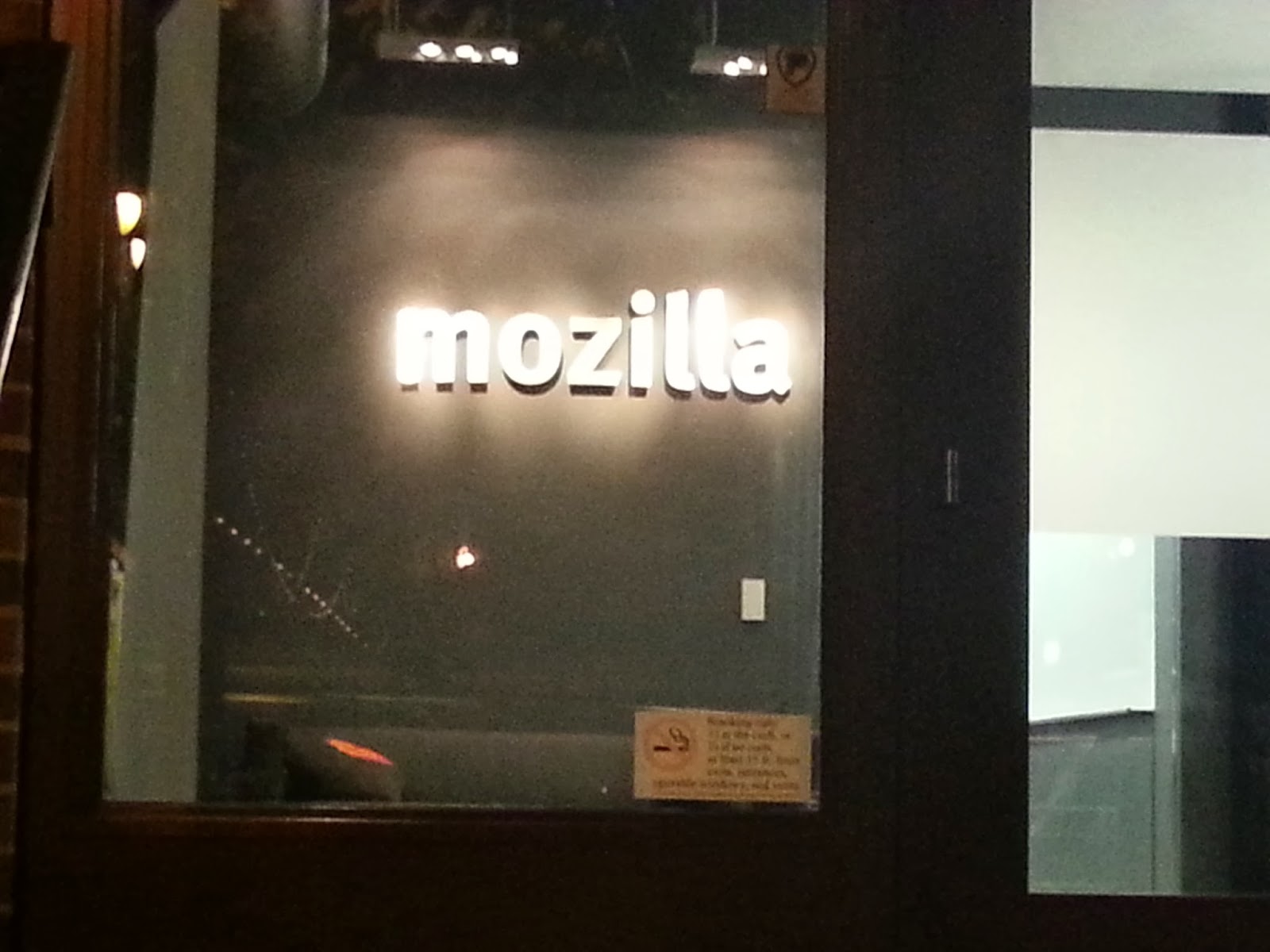 Gordon Biersch = closed.  New Mozilla offices = opened.  At least it was tech-related?  Weird.  As we were walking back toward the pier, we stumbled upon an indoor/outdoor restaurant with a decent beer selection, so not all was lost!

So another great VMworld again this year.  What will next year bring?  All we know for certain is that it will be in San Francisco at the Moscone Center, August 25th-28th.

One last thing... why were there Hyper-V books in the store? 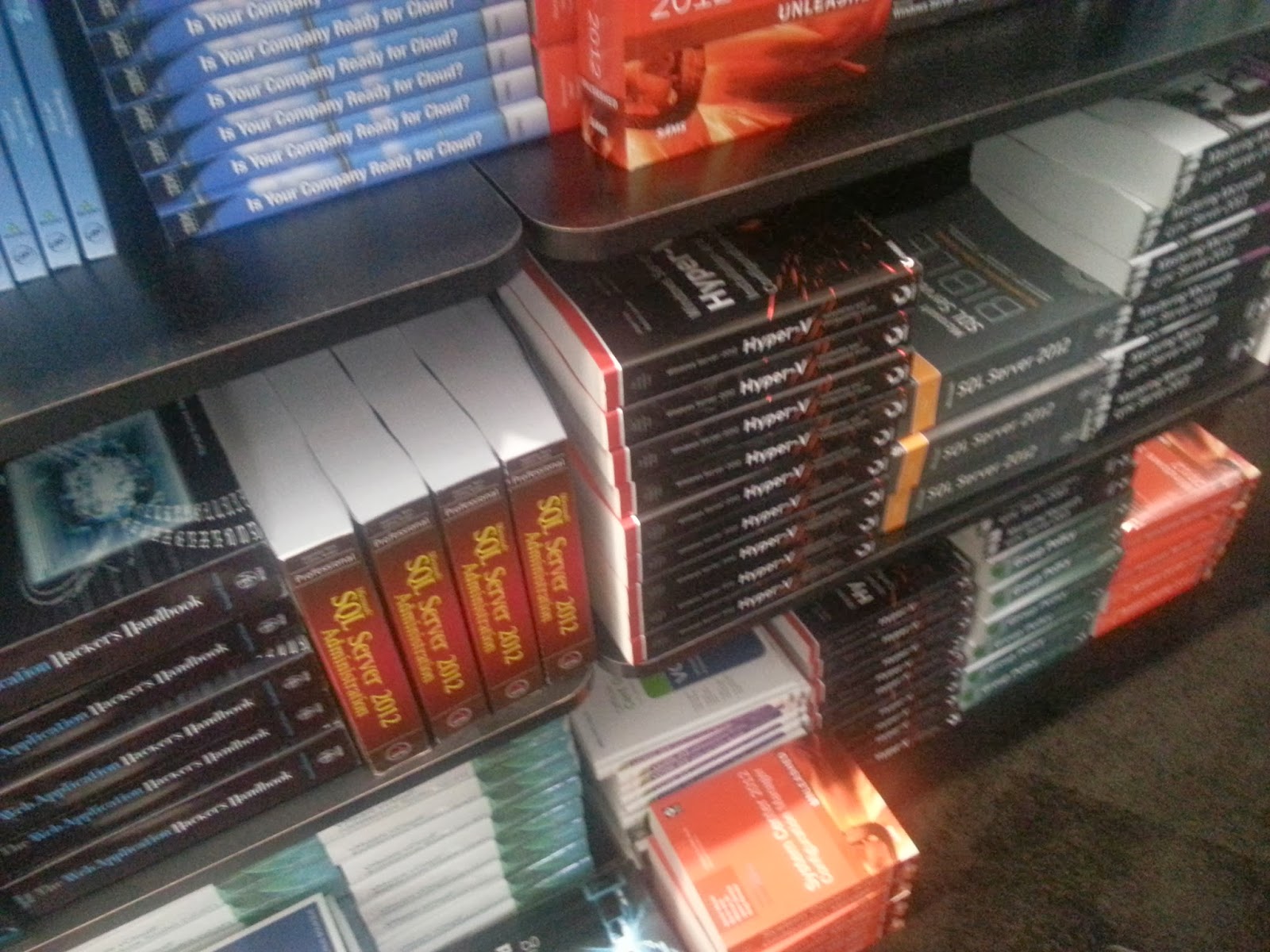